Estonian Transport Administration (formerly Waterways Administration) had formerly created a Sailors Registry which was the primary tool for the diploma department. While the registry was well suited for centrally keeping track of various sailor-related documents, it wasn’t designed to allow access for sailors themselves, which meant that application processes still required the physical presence of both the sailor and the official in the bureau.

The goal was to create a central system for all related parties which would automate processes and hence lower the workload of officials while also reducing the amount of paperwork. That would include sharing verified personal data between other government registries (population register, ID-document registry, EHIS) and institutions (hospitals, law enforcement agencies, and educational institutions), allowing sailors to get an overview and apply for new maritime-related documents and enabling officials to pre-define application processes with various requirements. 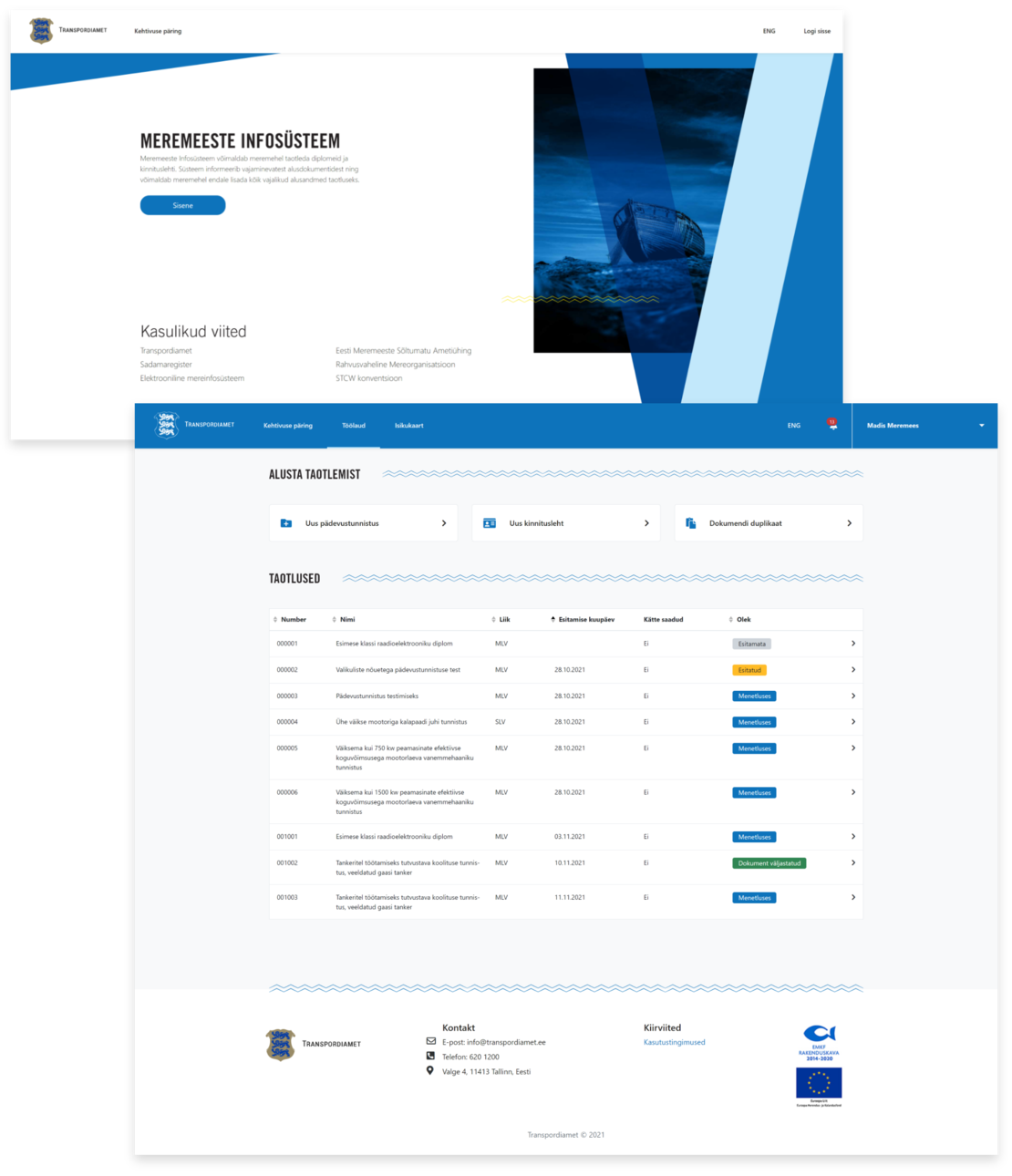 The project kicked off with analysis, during which the business necessities were mapped out in detail, which eventually led to a clear scope for the technical solution. This stage involved numerous parties who would become the end-users of the system, such as representatives of educational institutions, doctors, third-party interface representatives, and many more. We also had to assess the quality and state of the existing data to develop a migration strategy. The outcome of the analysis stage was detailed user stories to enable an efficient development process.

In parallel to the analysis, our UI/UX team created an interactive prototype to help visualize the scope of the system and determine the user interface. This was done for both desktop and mobile views.

The system is integrated with the population register, ID-document registry, Estonian Education Information System, TARA, and Andmejälgija (national data tracker), all using X-Road and supporting data flow in both directions. The system enables querying for sailor-related certificates of competencies and confirmation sheets (both of which are issued by the Transport Administration), sailor’s suitability for working in various positions at sea as well as verify the validity of numerous documents to prevent counterfeiting.

The outcome is a modern and user-friendly self-service portal, which allows the sailor to apply for new documents and also get an overview of its own existing certificates of competencies, confirmation sheets, health certificates, practices, training, and maritime educational data. Additionally, the system also enables sharing certain personal documents with third parties without requiring them to have an account in or access to the system.

For the officials of the Estonian Transport Administration, this system significantly increases the traceability and the efficiency of the procedural processes. This is done so by automated pre-fill of procedure data or enabling sailors to fill in the data themselves. Earlier, all this was done manually by the officials. The system also provides segregated communication channels between the officials and applicants within the application process to tackle any shortcomings or faulty inputs. Finally, the system provides two-factor processing mechanism to resemble how the process would take place manually – first the processing of application requirements and then the issuing of the document by a higher official.

The system’s administrator can create a template for each document with various requirements. The requirements can of many kinds, such as personal data, training, certificate of competency, health certificate, practice, and many other. This kind of flexibility enables the use of almost all kinds of documents within the system down the road without any additional improvements.

What makes the system even more comprehensive are the numerous third-party integrations. Doctors now have the ability to get an overview of, insert new, or check the validity of health certificates using the system. Manning service providers, captains, and shipowners can confirm the practices the sailors have entered into the system, insert them themselves or just get an overview of their related practices. Representatives of maritime educational institutions can insert training results both one by one or with a bulk insertion mode using protocols. All this eliminates the need for a significant amount of paperwork as the information can be inserted straight into the central system by various related parties.

The project offered challenges in terms of the numerous parties involved as well as a short deadline for the grand goals. What is more, COVID-19 forced everyone to home offices early on, which made everything even more difficult.

The cooperation with the client was good and thanks to the flexibility from their side as well as the motivation for the success of the project allowed us to find even better solutions than initially requested. An additional challenge was working out the migration strategy of incomplete existing data to the new system. This, however, was also solved thanks to the tight cooperation of both sides.

Despite the pandemic, the scale of the project, and the tight deadline, the outcome is an extremely flexible self-service portal that could easily be expanded to other domains thanks to its ability to combine various requirements to define numerous applications. 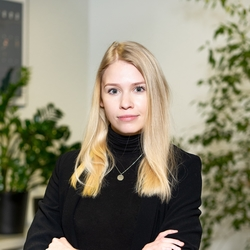 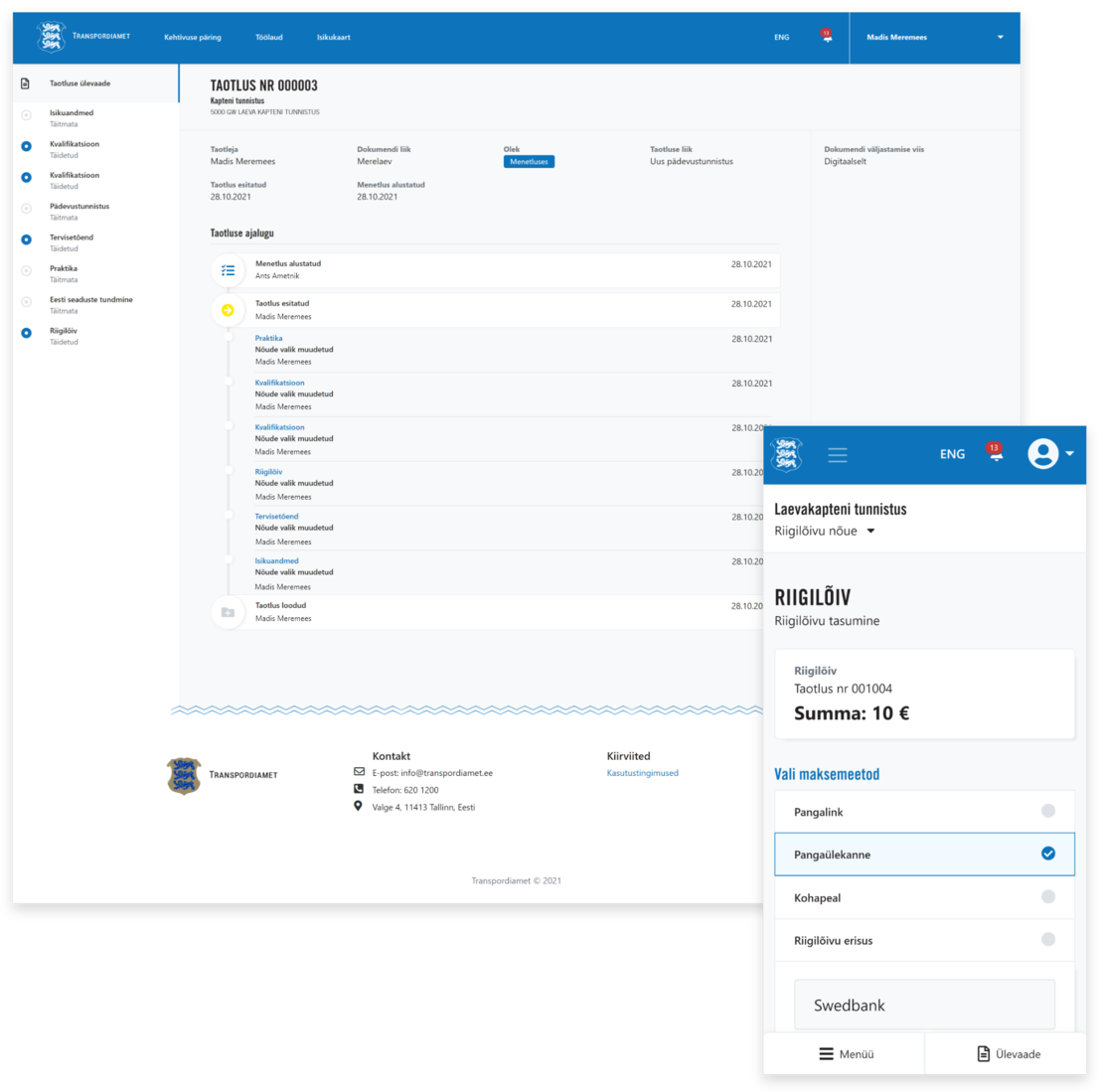 Estonian Transport Administration was received positive news in 2018 when EMKF structural assistance fund decided to support the development of a new maritime information system with a considerable amount.

Until then, sailors and maritime personnel were forced to be physically present in the administration’s bureau for various processes. What made the matter even worse was the fact that this procedure had to be repeated at least twice – once for submitting the application and then to receive the corresponding document. Without exaggeration, at least an hour was unnecessarily wasted during each application process. Considering that the certification department processes over 1000 documents yearly, it was one of the main goals in the administration to reduce the strain on this system.

At the end of 2019, an international public procurement was held where the winner turned out to be AgileWorks AS.

Before learning about the winner, my only contact with them was through their landing page and I had various doubts. I found some assurance in the name of the company, “Agile”, as the goal of the employer was to employ agile principles throughout the project.

While agile principles have been the preferred direction for at least 10 years in the public sector, the reality during the contracts has been the opposite. I would like to state that AgileWorks, however, is well worthy of their name and employs agile principles even when the client is stuck in their old habits.

The timeframe for the project was relatively tight due to the constrictions of the financier – the project was to be completed within 11 months. Within that time, AgileWorks had to complete a detailed analysis to assess the business domain, create a user-interface as well as develop the system. What made it even more complicated for them was the fact that the data from our old systems had to be migrated and adjusted to the upcoming system as well.

The analysis stage was intense as agile development principles aren’t that familiar for public sector officials. Tight deadlines and a fixed budget raised the tension even more. One of the biggest challenges was to enable officials to portray the system under development without actually having it in front of them and making them let go of existing processes.

Despite the challenges, the analyzed subjects were almost immediately followed up with user interface prototypes, which rapidly led to the fixation of the main system workflow. In addition to the grand goals of the project, the situation was made even more difficult due to the COVID-19 pandemic, which moved the communication to virtual channels almost immediately.

Thanks to the high effort of the contractor and the cooperation of the employer, the project reached its goals.

The outcome does not only have an immensely positive effect on the Estonian work culture but is a role model on the European scale. In the 2nd quarter of 2021, EMSA has also started the development of a digital maritime certificates system, one for which our solution is certainly a great example.

I only have praises for our partner, AgileWorks, as, despite the delayed replies on our end, they carried on the work processes in a truly agile manner. Thank you for your pleasant cooperation and a great outcome! 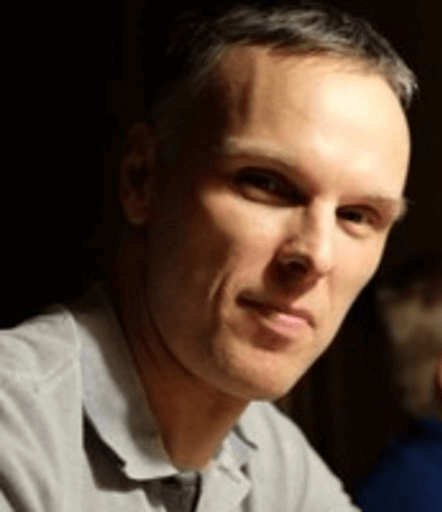 The project took 11 months to complete, which means that a relatively short period yielded in a comprehensive and flexible self-service portal. The system saves a lot of time for numerous parties, reduces the amount of paperwork in various processes, and acts as a maritime portfolio for sailors. The system is in use since November 1st, 2021, and is accessible from https://meremees.transpordiamet.ee/

Estonian Centre for Standardisation and Accreditation

Development and management of the Estonian standards management system and integration with other international systems. We also developed the online store platform.

An application developed for printing service providers, which eases quotation and ordering processes by providing accurate bids for the desired work within seconds.

Belgian company’s web platform that is the first in the world to enable persons to manage their personal data saved by private or public organisations centrally, from one location.

Come to entrance No. 2, located near the A building sign (next to Kalamaja Pagar). Use the phono lock for entering (No. 204, then the green button). Then come up the stairs and over the roof according to the instructing signs.